Opinions: From the desk: My why

These topics plagued my research around public schooling, my second-semester ALAR/P 2 topic.

In mere minutes, I had to give a presentation on the pros and cons of our current education system in front of an audience that included my former teachers, random judges and Superintendent Eric Knost.

Beside the fully lit SMARTboard displaying my Powerpoint, I stood and stared out at the emerging crowd of teachers beginning to fill the room. Sweat accumulated on my forehead as I greeted each additional guest.

While I set out to find solutions, I came out of my research with infinitely more questions and a disappointing lack of definitive answers. What I gained instead, however, was a true passion for education.

The relationship between a teacher and a student is a complicated one; nevertheless, it’s one rooted out of a deep love and respect.

At the February staff meeting, Feb. 6, faculty members gathered in the Commons to talk about upcoming issues and events. During that briefing, Mrs. Lauren Schoellhorn showed a video that I had the pleasure of editing.

“You are my why” was based on the premise of teachers telling students how much those students’ personalities and attitudes makes the teachers love coming to work.

The video gave me hope.

There were dozens of cell phone videos on my laptop showing teachers and students hugging and crying–coming together to celebrate the miracle that is learning and interacting with others at school.

EHS is a special place because it brings together children from all walks of life and backgrounds and puts them in an environment ripe for learning and discovery. I can walk down the halls and see Christians, Muslims and Atheists. I can see gay people, straight people, white people and African-Americans. Each of us brings forth our own opinions and experiences to share with the collective group.

More importantly than that, public schools connect youth with adult leaders to serve as guides and role models for students striving to achieve their highest potential.

I have the honor of witnessing the work teachers put in every day. Whether it’s staying before or after school to explain a concept to a struggling kid or sitting with a child as they cry about issues facing them at home, the faculty we have here at EHS are some of the best in the world.

They are my why.

The passion I have for learning today is a direct result of actions taken by my superiors. Every day I have the privilege of sitting in AP United States History and listen to Mr. Bryan Clar as he fascinates us with stories and makes us laugh until we cry.

In Clar’s class, there’s no such thing as “Roosevelt formed the Rough Riders.” He would say “Theodore Roosevelt assembled a group of cowboys, outlaws and men of all occupations to join his special division of the cavalry. When there wasn’t enough room for their horses on the ship, they were forced to charge up San Juan Hill on foot.”

Coach Clar constantly throws in trivia and connects with each individual student. Some of his traditions include identifying Kanas as “God-forsaken Kansas” and Delaware as “Freakin’ Delaware.” When talking about the treaty that ended the Mexican-American War, he proudly stands in the front of the room with his feet shoulder-width apart and his arms at his sides. In a drawn-out fashion, he emphasizes every word of the “Treaty of Guadalupe-Hidalgo.”

After hearing that about 15 times, it’s hard to forget.

During seventh hour, I head upstairs to Coach Michael Hanna’s AP Statistics course, and I learn about practical ways of testing mathematical hypothesis. Though this may sound boring, Coach Hanna constantly brings it back to practical terms and shows us how these processes are being used today in the professional world.

Some teachers would settle for telling us, “The reason we make the alpha value higher or lower is dependent of whether a Type 1 or Type 2 error would be worse.” Coach Hanna takes the extra step and says, “This is a relevant concept in the world of pregnancy tests because we would rather tell someone they’re pregnant when they aren’t than tell someone they’re not pregnant when they are.”

Not only am I learning the information, but I am becoming a more versatile, intelligent member of society.

There are a thousand more examples I could write about. I wish I had enough words to mention every single extraordinary teacher that had a profound impact on my life. That list itself would end up longer than this column.

I love coming to school in the morning because I know that I’ll have the opportunity to work and interact with all of these incredible people. Middle school and elementary school was no different for me.

To quote the late, great Whitney Houston, “I believe the children are our future. Teach them well and let them lead the way.” I feel hope knowing that the next generation of doctors, lawyers, scholars and politicians are being brought up by educators truly dedicated to student success.

In many ways, I despise the way public schools are being handled nationwide. The Senate just confirmed Betsy DeVos  as Trump’s Secretary of Education–a woman who doesn’t know the first thing about the public school system.

Fortunately, EHS has provided me with nothing less.

EBN: What’s the deal with finals?

EBN: Girls in the weightroom

The weightroom: It’s an intimidating place for some. At Eureka High School, weightroom coach Ralph Gianino works with girls to give them confidence ...

Reporters Caleb Wetzel, Josh Travis and Carter Guntli look at what custodians and cafeteria staff are doing to adjust to the COVID-19 pandemic. ... 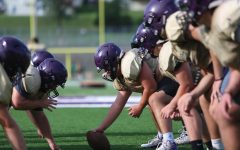